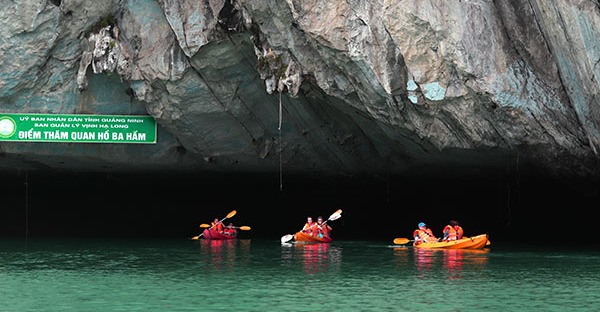 This island is part of the range of islands at the farthest end of Hạ Long Bay, bordering the immense zone Long Châu Sea.

Ba Hầm Lake is situated in the middle of a narrow, rectangular area, with the all four sides enclosed by vertical cliffs.

The lake is a system comprising three wide and round pits, linked together by a narrow and meandering tunnel.

Stalactites hang from the ceiling in a myriad of strange, coloured forms. The silence is disturbed only by the sounds of the boat’s oars.

On the island are many species of plants such as orchids, benjamin figs, banyans and cycads, which blossom throughout the year.

It is also the home of yellow-haired monkeys, birds, flying squirrels and bats.

Under the deep blue surface of the water are the animated lives of shrimp and fish.

Although 25 km from the shore, it has long been considered an ideal tourism zone.

The entrance is a open semi-circular hole in the flat stone wall on the north-west side of the island, 4 to 5 m above the sea.

Starting from the entrance, tourists enter the first tunnel, which boasts a forest of stalactites and stalagmites in different shapes and various colours.

They fall down the water surface like the roots of banyan or ficus trees.

The deeper one pushes into the tunnel, the darker it becomes.

The river is deep yet so clear that one can see shoals of fish swimming.

Some 100 m from the entrance one finds a shaft of light coming from the roof of the tunnel, which reveals different kinds of orchids clinging to the cliff, cycads growing here and there, trúc duôi gà (a kind of reed with cock’s tail-liked yellow leaves) flourishing in clumps.

In the southeast cliff of the second tunnel there grows an old carambola tree, which bears fruits all year round.

Tourists can find groups of monkeys, flying squirrels, or silver-headed parrots gathering in its branches.

Lying one cliff away from the second one, the third tunnel is home to various species of bats and butterflies.

Amidst the tranquil atmosphere, you feel like boating in an abyssal well walled by mountains.

Ba Hầm Lake is one of the beauty spots of Ha Long Bay.