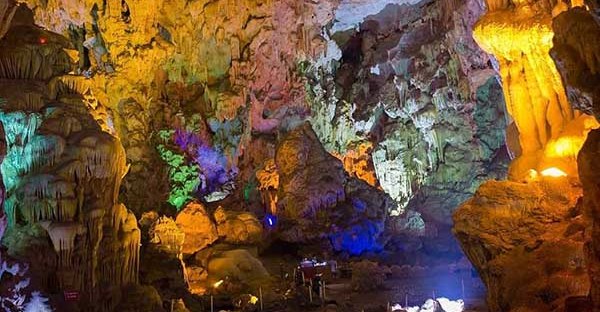 It is situated on the south-west side the bay, 4 km from the wharf outside of Ha Long City.

The way to Thiên Cung is a perilous one, covered on both sides by thick forest. After entering a narrow gate, the grotto’s 130-meter-long girth opens up.

Getting in we are more astonished in front of the very animated and splendid beauty which is made from stalactite.

On the east wall of the grotto, there is a grandiose and imposing picture with characters of tales.

Going out of the Thiên Cung Grotto, we have a sensation of just watching a unique, meticulous, interesting fine-art museum which is made by nature, get out of the imagine, ability and intellect of man.

This grotto is recently discovered, one of the most beautiful grottoes in Ha Long Bay.

Legend has it, that beautiful young lady named Mây (cloud), caught the eye of the Dragon Prince and he fell in love with her.

They were betrothed, and their wedding lasted seven days and seven nights in the very centre of the grotto.

In honour of the wedding, small dragons flew about through the stalactites and stalagmites, elephants danced together happily, snakes twined themselves around trees and two stone lions danced with their manes flowing in the wind.

A large elephant, smartly dressed, waited for the bride and the groom.

The genies of the south and north stars also came to attend the banquet, and the atmosphere was definitely animated and lively.

All these scenes have been seemingly fossilized in the grotto.

In the centre are four large pillars supporting the “roof of heaven.”

From the base to the top, many strange images seem to live in the stone: birds, fish, flowers and even scenes of human life.

On the north wall of the grotto a group of fairies seem to dance and sing in honour of the wedding.

Somewhere there is the sound of a drum beating, but it is actually just the noise made by the wind blowing through stone.

Arriving at the last partition of the grotto, a natural gushing stream of water babbles throughout the year.

Here are three small ponds of clear water. Legend has it, that this was where Mây bathed her 100 children, bringing them up wisely and happily into adolescence.

One path meanders out of the grotto; it was the way Mây, together with 50 of her children, took to harvest new lands.

The 50 remaining children, together with their father, were left to build the native land. Left behind by the mother was the natural stream described above.