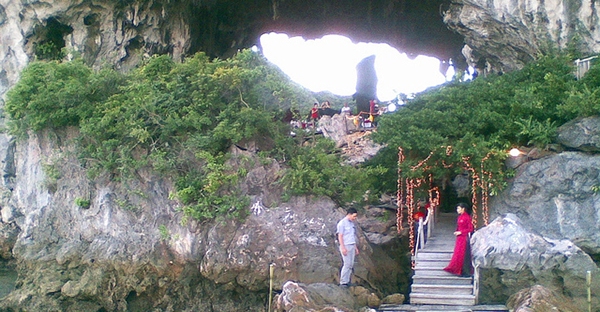 Trinh Nu Cave or Virgin Cave is situated on the island range of Bô Hon in the system comprising the Sung Sôt Grotto, Dong Tiên Lake and Luon Grotto. 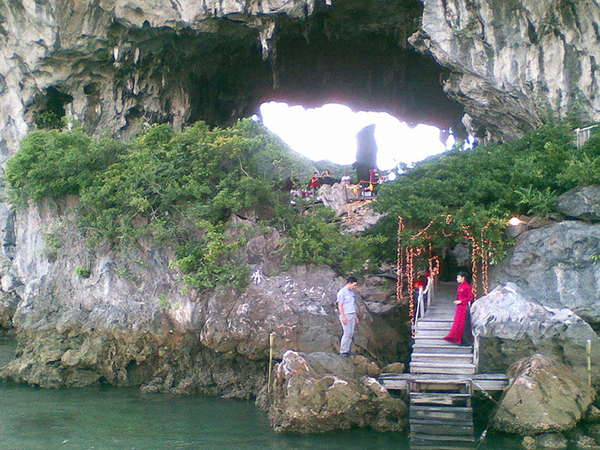 It is 15 km south of Bai Cháy Beach. For fishermen, the Virgin Grotto is their house, but for young lovers, it is considered as the symbol of truly love, and is the romantic place for taking oath of love.

Entering Trinh Nu Grotto, one finds in the middle of the grotto a stone statue of a lying-girl with her long hair hanging down who is looking to the sea in a vain hope.

One still hears his vain scream in tune with the wind blowing into the cliff somewhere.

Legend has it, there once was a beautiful fisherman’s daughter, whose family was so poor that it was in the service of the rich administrator of the fishing zone.

He forced the family to give him the girl as a concubine. She already had a lover who at that time was on the high seas catching fish to prepare for their wedding.

The administrator, angered by her refusal, exiled her to a wild island where she suffered from hunger and exhaustion.

On one frightening night, amidst terrible rain and winds, she turned to stone.

It was also the night that her lover knew of her danger, and he rowed his boat in search of her.

On the terrible night, the tempest destroyed his boat and he floated to one of the islands.

In a lighting flash he saw his mate in the distance, but his calls were driven away by the wind.

He used a stone block to hammer down on the mountain cliffs to announce to her he was nearby.

He struck until blood flowed from his hands, and in his final exhaustion, turned to stone (today’s Trong Grotto).

Tourists also find Trinh Nu Grotto attractive partly because of its association with a fanciful love legend: “Once upon a time, there lived a boy and a girl who deeply loved each other.

However, they were so poor that they could not be able to get married.

The boy decided to go offshore fishing with a hope that he could get enough money for his marriage.

And the girl painfully waited in vain for her fiancé. She finally took a small boat and rowed to the sea to look for him.

So immense is the sea, and so many are the islands, the boy, therefore could not hear her doleful call, though he was just several canals away.

Exhausted, the girl lied in a grotto, looking to the sea and got petrified after the last call.

The boy got lost in a grotto nearby, shouting to call the girl in vain.

The echo of their call through the cliff was so moving. At last, the boy became exhausted and petrified in the grotto – present-day Trông Grotto.”

Today, whenever passing this place, tourists can still hear his faint call.